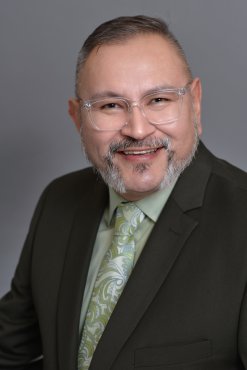 Louis Medina is the Director of Community Impact for Kern Community Foundation. He oversees the Foundation’s Nonprofit Strengthening Initiative, which includes grantmaking, community engagement, marketing/communications, donor relations and special events efforts such as our Give Big Kern Online Day of Giving.

Born in El Salvador, Louis has also lived in Japan, China, Spain and England, and traveled extensively throughout Asia, Europe and North and Central America. He found a calling in nonprofit work while training as a phone crisis counselor for L.A.’s Suicide Prevention Hotline in the early 2000s. Since then, he has acquired 15 years of experience in nonprofit work, including in such diverse areas as crisis intervention, grant writing, homelessness and poverty prevention, outreach and marketing, project and event planning, and fundraising.

A lover of languages, Louis received a Double Bachelor of Arts degree in East Asian Languages & Cultures and International Relations from the University of Southern California, and a Master’s degree in Applied Linguistics from the Universidad Complutense in Madrid, Spain.

Need help getting connected to community resources? One of our Connected Community Network Coordinators will connect you to the resources you request.